The McCready-Harris race for North Carolina’s 9th Congressional District is continuing to gain national attention.   It remains one of the closest “toss up” races in this election cycle and has become a bellwether for Democrats’ chances to take back the House of Representatives.  FiveThirtyEight has the race as a literal dead heat: 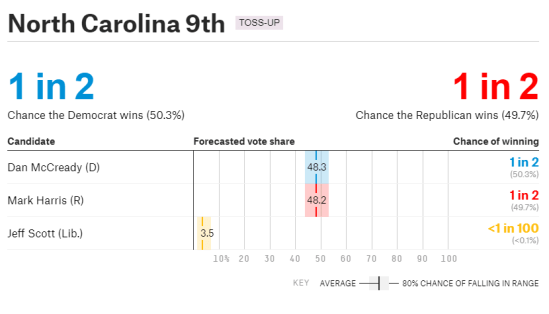 Harris won the primary over incumbent and establishment favorite Robert Pettinger, bucking several of the polls in the process.  I saw Harris’ victory coming from a mile away.  Here’s what I had to say:

I’m going against the polls and insider opinion with this pick.  Although the lines of the district have changed, Harris lost to incumbent Robert Pittenger by a mere 134 votes two years ago.  In an ordinary year, Pittenger’s incumbency would keep him in office.  However, we’re living in a time when being a sitting member of Congress is a bad thing in a Republican primary.  Harris will do better with Trump supporters and evangelicals, and Pittenger will get drained with the rest of the swamp.

Everyone is continuing to bait Dan McCready into attacking Harris’ preaching past.  Here’s the latest:   Sarah Silverman, a comedian and liberal stalwart, weighed in on Twitter this week, linking a video mash-up of Harris’ Greatest Hits:

Can’t wait for every woman in North Carolina to vote https://t.co/K3BMxOAnb6

Which Way Does the Race Turn??

McCready is running as the epitome of a moderate candidate.  He has yet to get into the weeds with Harris or go negative in any significant way.   I continue to believe that this is a good strategy.   The first reason is that McCready will lose a war about family values and traditional marriage against a Baptist preacher in the South.  The deeper, more profound reason is that decent people are tired of the division in this country.

But today is Labor Day, and now the campaign season has officially begun.  McCready’s about to be shelled with a boat-load of outside money in one of the most contested races in the country.  McCready is an ex-soldier, a fighter.   How does he fight back?  That’s the million-dollar question that folks paid a lot more than me are hired to answer.  Here’s my two cents anyways:

The opportunity remains for McCready (or outside groups on his behalf) to make this a one-issue campaign about Harris’ “controversial” preaching history.  I think McCready will resist the temptation, take the high-road, and win a close race in November.

Looking back on my prediction for the primary, I suggested Harris would do better “with Trump supporters and evangelicals” as if these groups were different.  I was wrong.  They’re not.  The more evangelical, southern, and white you are, the more you support Trump (on average).

Harris has readily embraced Trump and his supporters from the beginning.  This strange “marriage” of evangelical Republicans to Donald Trump is a real thing.  Simply Google “evangelicals” and “Trump” for a myriad of explanations of how it came to pass.  I believe this support comes from Trump’s unflinching ability to tap into white angst over a diversifying nation (at best) and plain racism (at worst).   Regardless of the cause, Trump supporters will not be swayed.  They are wedded to Trump, a serial philanderer.  He gives them what they want to hear, and they love him for it.

Trump’s affairs, multiple marriages, and habits of “kissing without waiting” and “grabbing women….” do not compute with Harris’ biblical definition of marriage.  But it’s 2018, so Trump flew to Charlotte to headline a campaign event for Harris at a country club this week, raising money from wealthy donors.  This is the political reality we face today:  “values” aren’t as valuable as they once were.

By my definition of the common Trump voter, McCready faces a lot of “unswayable” folks in NC’s 9th District.  I’ve got some good news for McCready:  so did Roy Cooper.  Here’s Cooper’s map from 2016: 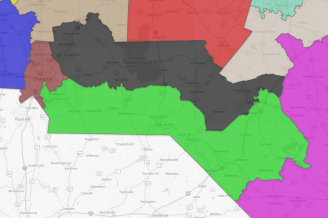 As you can probably tell, there’s Democratic votes to be had along the S.C. border in Anson, Scotland and Cumberland Counties, and I refuse to believe that Robeson County remains red in 2018.  Hurricane Matthew accounts for Republican success in Robeson in 2016 with many voters displaced from their homes.

As I’ve noted in great detail before, this election is essentially a referendum of Donald Trump.  As a result, Dan McCready might as well run against Trump and ignore Harris.

If you look closely, McCready has adopted this strategy in a smart and subtle way.  He is painting himself as a moderate, as a small business owner, as a soldier (not a draft dodger), as a family man.  He looks a lot like a popular member of Congress who died this week whose name also starts with “Mc,” and whose death brought people together in a profound and sharp contrast to the politics of Donald Trump.  In short, McCready’s doing a damn good job.

There’s a line down the soul of America right now.  I’ll take my chances in the Sandhills on the high road, with the soldier.