We’re a month out.  The effects of Hurricane Florence are finally wearing off, the Kavanaugh fight is over, and people are beginning to pay attention to the midterm election.  Once sparse yard signs are clogging intersections.  The TV ads have started.  It’s time to do some Cumberland County prognosticating.

It’s well known that this election will be about Trump.  Most midterms are a referendum on the sitting president.  I’ve argued that his influence will trickle all the way down to to local races.   As it stands today, more than twice as many women disapprove of Trump than approve of him.  Men on the other hand seem to be sticking by him.  We’re left with a gender divide that may be the largest in modern American politics.

Women are fired up and for good reason.  On cue, more women are running for office than ever before.   But I think that this gender divide runs deeper than party.  Women want women in power.  They’re tired of the old, predominantly male class of folks running everything.  As a result, I’m predicting cross-over votes by women, for women in this election.   This will be a dangerous election for any incumbent male with a female challenger.  Will any men be left standing?  Of course, but many won’t.

Two local races that might test this theory are the Tal Baggett – Caitlin Young Evans race for District Court Judge and the Billy Richardson – Linda Devore race for NC House (44).  If Evans can win over Democratic and Republican women in her race, she has a good shot to unseat a long-sitting judge.  If Devore can poach Democratic women voters, she could pull an upset in a Democratic leaning district.  Expect both incumbent men to hit on kitchen table issues to woo women voters.  This will come in the form of ads regarding DWI’s/Public Safety/Domestic Violence for Baggett and Education/Teacher Pay/Water Quality for Richardson.

If you need some graphic proof of my theory, look at Kirk Deviere’s current Facebook logo:

It’s not hard to guess the target audience.  Deviere knows the key to taking down Wesley Meredith in 2018 is women.  Meredith knows this too and is undercutting Deviere by running negative ads featuring a female voice that mocks Deviere’s wardrobe.

Lady Justice will determine how the scales tip this election.   I think it’s time.

Note:  Billy Richardson (NC House 44) is my father.  I do my best to avoid commenting on his races, but in this case it was unavoidable.

Dallas Woodhouse was in a hurry to get ballots printed after a court ruled in favor of Republican Legislators today:

The case involved Governor Cooper’s challenge to the new, improved ballot language describing constitutional amendments that take away his power.  It’s opening weekend in college football, and Lee Corso has a response for Dallas:

The Supreme Court of North Carolina wants a bite of this apple and certified review mere hours after the case was decided.

END_OF_DOCUMENT_TOKEN_TO_BE_REPLACED

I’ve been orbiting the fringes of political campaigns since I was a little guy.  Call me Pluto:  not big enough to be called a planet, but still in the solar system.   From the outskirts, I can report that the political universe looks a bit shaky at the moment.

At the state level, this election should be a referendum on the Republican legislature and its stranglehold of the power of state government.  We have multiple constitutional amendments on the ballot.  The Governors of North Carolina have even waded into the battle.  Legislative leaders attacked the former governors in response to their response.

My advice to legislators….If any of you want to take on the responsibilities of the governor, then have the courage to run for governor, and win. Earn it. Do not hijack these duties through the two deceitful and misleading amendments that attempt to fool our great citizens. https://t.co/meNMXtJUJL 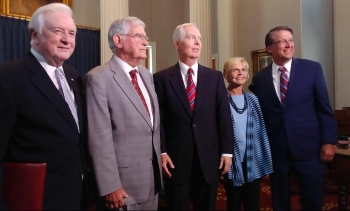 This is not normal.

END_OF_DOCUMENT_TOKEN_TO_BE_REPLACED

Here’s the vote tally from the N.C. Senate today, overriding Cooper’s veto of the bill to rig the Supreme Court election.

Meredith voted against the bill last week, but as I predicted, Meredith didn’t show up for the veto vote.   Some vacations are just too important to your re-election chances to pass up.

The legislature eliminated primaries in judicial races this year.  As a result, we have a three-way race for one seat on the North Carolina Supreme Court.  There are two Republicans and one Democrat in the race.  One of the Republicans hasn’t been a Republican very long.

Republican leaders are upset at the way their best-laid plan to take back the Supreme Court is playing out.  They have a fix in mind, filed today.  They will eliminate one man’s right to run as a Republican to make it easier for the other Republican to win:

Full PDF of the bill