May 3, 2019 By Matt Richardson in Fayetteville Politics, NC Politics 4 Comments

This site has been live for over a year now.   I have posted over 80 different articles covering a range of topics, many controversial in nature.  To this point, I have only taken down one.  It was a post entitled “Leave it in the Dirt” in which I criticized the new Civil War Center being built in Fayetteville.  I took it down because it angered and upset certain people who support the museum.  For context, here’s how the post ended:

Instead of reading the tea leaves that say, very clearly, that young people are fed up with North Carolina’s celebration of the confederacy, Fayetteville has chosen a new path in the exact same direction.   Yes, we’re going to take this emotionally charged, painful history and put a shiny new cover on it and tell “both sides of the story” in our “museum of the future.”

Leave it in the dirt where it belongs.

I take some pride in standing by my opinions, but I didn’t in this case.  The conflict didn’t seem worth it, and I retreated with a click of my mouse.  But I knew the battle would go on, and so I was not surprised when the museum found its way back into the news this week.

Colvin Steps into the Breach

On April 30, the mayor of Fayetteville stirred up a skirmish over the new museum, questioning the project’s funding on his Facebook page:

Colvin’s argument is that the state’s money could be better spent on more pressing issues.  He was interviewed about his comments by local news sources, and here’s some of the media coverage that ensued:

Representative John Szoka, the sponsor of the legislation funding the center, said he was “perplexed” by Colvin’s position because the Fayetteville City Council had unanimously supported the project in the past.  Szoka’s correct.  Here’s Colvin with a golden shovel in his hand (along with Rep. Szoka and others) at the groundbreaking ceremony a year ago: 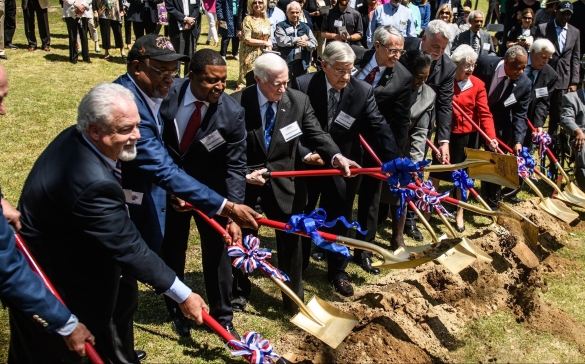 Szoka was quick to defend the project’s economic impact.  He believes the museum will be a tourist destination, drawing visitors from across the state.

Colvin didn’t back down from his new position.  Apparently liking the sting of this battle, he doubled down last night with another Facebook post:

First, let me point out how profound this is politically.  There is a bill in a state legislature to give a municipality over 55 million for a construction project in the municipality.  This is free money.  Just, here you go, have 55 million dollars.

The mayor of that municipality is now publicly chiding the expenditure, saying the money should be spent on other things like Florence relief and infrastructure.  He’s basically telling state legislators how to do their job, a “thanks, but no thanks,” if you will.

At the groundbreaking ceremony that Colvin attended, Former Governor Jim Martin told the crowd that he prayed the museum “would be an instrument of healing through our part of a divided country.”  Colvin himself stated “this was something that will bring us together, not increase our divide.”

So why is Colvin now challenging the project after publicly supporting it?

There are two ways to look at Colvin’s actions, one is the raw political take, the other is the human side:

It’s easy to see Colvin’s actions as political hedge.  This project has been controversial in the African American community from the start.  It’s going to be built on the top of  Haymont Hill, the site of the old Confederate Arsenel.  By criticizing the project without really challenging it, Colvin is giving lip service to those critics.  He’s also giving red meat to Hurricane Florence victims who are fed up with government in general right now.  You could also argue that Colvin is trying to change the narrative, shift blame, or rally people to his side.  It could be any of these things.

But I think it’s deeper than all that.

I think Colvin, like me, is personally conflicted about the entire project.  He admitted at the groundbreaking ceremony that it was “difficult” for him to embrace the museum initially, but he came around when he learned that it would tell the full story of the war and its aftermath, including its impact on African Americans.  Now he’s trying to “unembrace” it.  Unfortunately, politicians (unlike bloggers) don’t get to “unembrace” ideas with the click of a mouse.

And so I’m left with the same take I had when I wrote about this project a year ago.  This museum, although it has admirable goals, will not bring people together.  The Civil War, by its nature, cannot do that.  It is and always will be about race.  We cannot “tell both sides” without making a moral judgment about one of them, and there is only one right side of this history.  Fayetteville wasn’t on it in 1860.

Charlottesville, Chapel Hill, and recent presidential politics have demonstrated that our nation is still grappling with this debate, and our state and local leaders have made a policy decision to bring the debate, front and center, to Fayetteville.

Maybe Colvin’s right that our resources could be better spent on other things.  I guess he should have left that golden shovel in the dirt where it belongs?  Instead, he’s using it to dig a trench between our community and our state delegation.