What’s in a name?

In the information age, election ballots are a vestige of an age gone by. It’s literally a list of names, and you are provided nothing but the name when you vote. You would think with electronic voting devices that you could at least get a hyperlink to more information, but no, the uninformed voter must rely on the cadre of poll workers stumping outside for their candidate. This often an intimidating and obnoxious group (myself an annual member) that many voters pass by without a word.

The informed voter is not exempt from this challenge. Finding information beforehand on down ballot candidates can be daunting. These voters normally rely on newspaper articles or candidate websites that provide little or no information on substantive issues. So what is a voter to do? Pick the best name.

Voters typically vote for a candidate for which they identify by name or by a shared characteristic or platform. It could be as simple as gender or race, or as complicated as tax reform. Yet, how do you identify with a name? Simply put, a voter uses a combination of recollection and imagination. What can they remember about this candidate? Have they met them before? Who or what comes to mind when you think of candidate “x’s” name. Democrat? Republican? Or should I leave this one blank? Most voters complete their ballot, even if they do not know all the candidates. Unfortunately, this imprecise method of choosing the “best name” happens more than most voters like to admit.

The next logical question is whether candidates try to take advantage of this “name” game. The Democratic primary race for Senate 19 might be a good field test. Clarence “Ed” Donaldson is a retired District Court Judge; who last ran for office in 2006. However, Donaldson has never run as Clarence. He has always been “Ed Donaldson” on the ballot. I thought it might have been a clerical oversight or even indifference, but it might be electoral strategy. The primary will be a low turnout election; the Sheriff’s race driving turnout. Moreover, Senate District 19 has been redistricted to include more African American voters, and both candidates in the Senate 19 primary are white males. 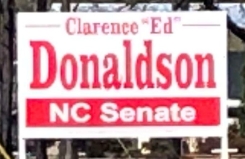 Is Donaldson running under his first name “Clarence” so that uninformed voters think that he might an African American? Only Donaldson knows for sure, but statistics for the district make it more likely than not. Based on voter registration statistics, there are 102 people with the first name Clarence in Senate District 19, and 52 of those people are identified as African American or 51% of the total. 51% does not appear statistically significant at first glance, however the district is roughly a third African American. Therefore, African American voters, in comparison to other races, are twice as likely to be named “Clarence” in Senate District 19. In addition, Donaldson does not have a website, and a google search reveals very little information about his positions or even his appearance. It is likely that primary voters will have to rely on scant newspaper articles and Donaldson’s own campaign materials in order to learn about his candidacy. Whether intentional or not, a lack of available of information may increase the numbers of uninformed voters at the polls, and in effect, the practice of choosing a candidate by their name.

So what’s in a name? Possibly your next State Senator.

About the Author:  Andrew Porter is a resident of Fayetteville.  He has been an adviser and manager of several local and and state campaigns, with a W/L record of 11-2.  He is undefeated in “non-NCGA-gerrymandered districts,” believes proper BBQ is served with coleslaw and vinegar, and is finishing his second year as a legal eagle at North Carolina Central.