March 6, 2018 By Matt Richardson in Fayetteville Politics Leave a comment 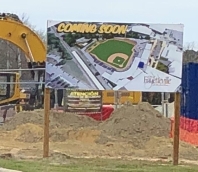 Recently Mayor Pro Tem, Ted Mohn, warned fellow city council members of what he considered to be an “apocalyptic” budget shortfall that was rapidly approaching.  Apparently, Fayetteville’s tax revenue is decreasing while spending is increasing.  No surprise there:  our local economy is fairly stagnant, we are adding multi-million dollar projects to our budget, and the cost of everything is rising.

The elephant in the room is the new baseball stadium.  City leaders have yet to get a grasp on how many millions of dollars they will need to build it, but the bulldozers keep digging up contaminated soil off Hay Street to prepare for our field of dreams.

What concerned me most was not the budget shortfall itself, it was the nonchalant attitude taken by our new mayor in response to Mr. Mohn’s warning.  The Mayor replied:

“I’m not concerned.  This is what we go through every year.”

I realize that our new mayor has been in city government for a while and has experience dealing with our budget, but I find it extremely hard to relate to his position.  The finances of my family and my business worry the hell out of me.  If there’s not enough money to pay necessary expenses, then changes have to be made.   Perhaps it’s a bit easier when it’s someone else’s money?

I have a question for the new Mayor:  Why do we go through this every year?

And a follow up:  Why aren’t you doing something about it?