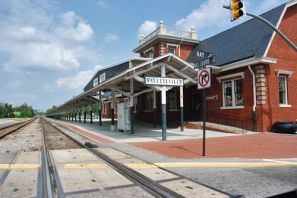 Fayetteville is loud. From every corner of the city, you can hear, and feel, Fort Bragg training. Motorcycles and cars, seemingly with outside speakers, don’t make it any better. Oh, and let’s not forget the occasional gunshots. My point being that it’s hard to regulate sound in an urban environment, but that’s what Councilman Dan Culliton wants to do in downtown. He wants to implement a “quiet zone” that will prevent trains from sounding their horns as they travel through downtown. Trains blast their horns to warn traffic and pedestrians of their impending arrival. A “quiet zone” will require the installation and maintenance of railroad crossing gates in lieu of the train horns. Culliton’s interest in a “quiet zone” has garnered the praise of some and the ire of others. It seems everyone has an opinion on Mr. Culliton’s project.

Mr. Culliton is in his first term on the Council, and I believe made a “rookie” mistake by bringing up the proposal without vetting it thoroughly. I do believe that Mr. Culliton has conducted a fair amount of research into the issue, however, an effective policy maker must have definitive answers to certain questions, such as funding. The source of funding at this point is unknown, but Mr. Culliton has expressed optimism that the “quiet zone” can be completely funded by a federal grant. Mr. Culliton should have waited until he had a better idea of how to fund the project before approaching the rest of the Council. As they say, hindsight is 20/20, and this can be a great learning experience for Mr. Culliton.

Additionally, what seems to have also caught the ire of the public, is that Fayetteville has many other issues that need addressing. It’s not to say that Mr. Culliton is not working on these issues, but this is the first issue that Mr. Culliton has gone out of his way as an individual member of the Council to address; obviously because it’s an issue that has been brought to his attention by his constituency. Moreover, this is a very easy issue to understand. People know why trains blow their horns. Mr. Culliton’s critics have admonished him for sacrificing the safety of the many for the convenience of a few. Another criticism that would have gone ungarnered if Mr. Culliton would have fleshed out the issue more. I am personally indifferent to the issue, but I do fear that Mr. Culliton may be forever known as “the train horn guy.”

About the Author:  Andrew Porter is a resident of Fayetteville.  He has been an adviser and manager of several local and and state campaigns, with a W/L record of 11-2.  He is undefeated in “non-NCGA-gerrymandered districts,” believes proper BBQ is served with coleslaw and vinegar, and is in his 3rd year as a legal eagle at North Carolina Central.