With several days of early voting under our belt and a higher-than-expected turnout, we have enough raw data to draw some preliminary conclusions about the 2018 electorate in Cumberland County.

I’ve written at length about a predicted surge in female voters this election.  I appear to be dead wrong after several days of early voting as the opposite has happened, at least in Cumberland County.  Here’s the breakdown: 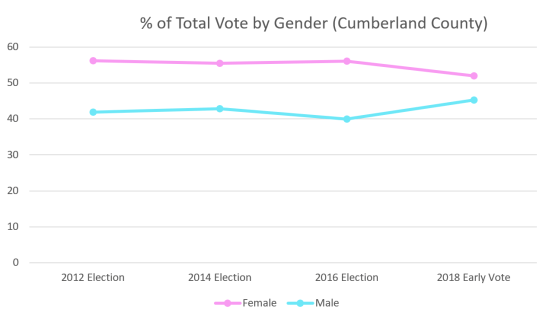 Here’s the same figures in a bar-chart: 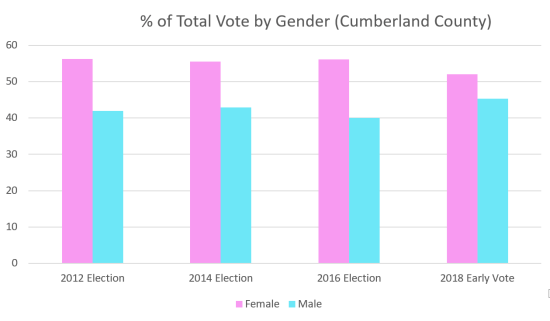 This year, the vote is closer than it’s been in the past three major elections with men making a 5 point jump to 45.3% of the vote.  With women at 51.99%, the gap has closed to 6.7 points.  It will be interesting to see if this trend holds.  Needless to say, I’m surprised.  This will definitely affect local races.  Read this link as to how that might work.

Here’s a breakdown of the recent historical vote by party in Cumberland County: 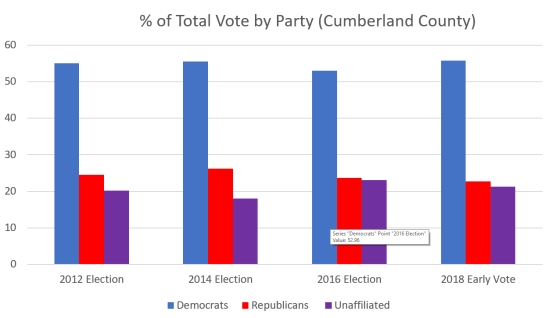 And a line graph of the same numbers: 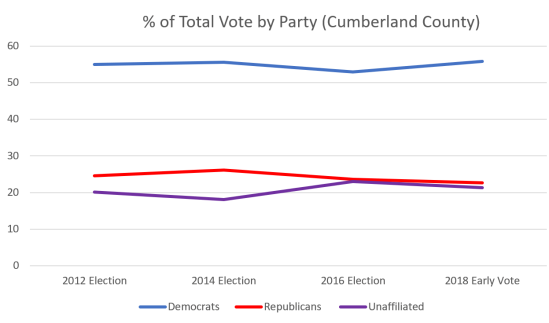 As you can tell, party voting has remained relatively stable over the past three elections.  While Democrats are enjoying a slight edge in the 2018 early vote, that is to be expected.  Democrats like early voting, especially on weekends.  If anything, I would expect Democrats to be doing better than they are in the 2018 early vote.  The current figures suggest that Republican voters in Cumberland County are rallying around their Commander in Chief with more enthusiasm than anyone predicted.  Perhaps the Kavanaugh nomination battle got men agitated.  We’ll see if this holds as election day nears.

Enthusiasm seems high across the board in Cumberland County.  Party trends are stable, and men are doing better than expected.

On that note, I received my first ad from Wesley Meredith yesterday.  All the others (pink glitter and what not) have been addressed to my wife.  This one argued that Kirk DeViere wanted to take away my right to hunt and fish because he was against one of the proposed constitutional amendments.  I assume the ad was targeted toward men.  Looking at early vote out of Cumberland, it’s not a bad strategy for Meredith to target guys as we don’t seem to be going down without a fight this year.

By the way, like DeViere, I’m against all of the amendments.  Still, I’ll probably go fishing this weekend.  Certain rights are inalienable. 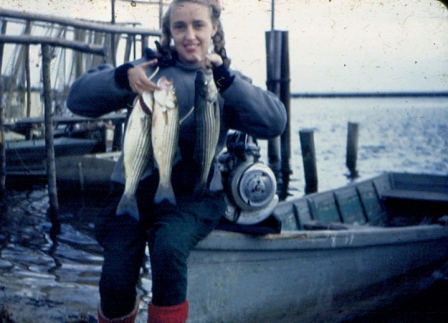 That’s my grandma on the New Bern waterfront as a young lady.  I wonder who she’d vote for.