I’ve been very critical of the plans for the new parking deck in downtown Fayetteville that we will not be allowed to use for baseball games and community events.  I won’t re-hash those same arguments.  The bun is in the oven on the deal, and we will be able to hold our elected leaders accountable for its success or failure.

A preliminary report is in from the “parking expert” the City Council hired out of Indianapolis to assess the situation.  Unsurprisingly, the consultant still needs more time to finish his evaluation.  It’s only been five months, after all, so he’s still on the clock.  The final report is coming later.

In the meantime, he says we’ll be fine for games, but we’ll have parking problems during larger events.   He suggests we conduct a marketing campaign and add automated signs and smartphone apps that will tell people where to park.  He also recommends that we adjust our paid parking regulations (charge more money).

The future for downtown parking seems obvious:  less supply + greater demand = paid parking for everyone that can afford it.  We’ve made a commodity out of our downtown public space.  It’s no longer ours, it’s the City’s, and we’ll pay to use it.

I have complained enough.  Here’s a solution that may help:

We don’t need a marketing campaign or smartphone app to get us out of a problem of our own making.  We need more parking spaces next to the stadium, preferably free spaces.  This will encourage more Fayetteville families to attend more games. 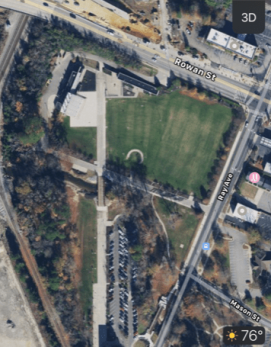 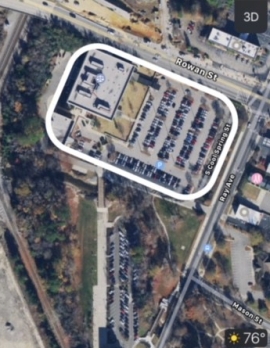 Here’s a crude mock-up from my Iphone of what I could see working: 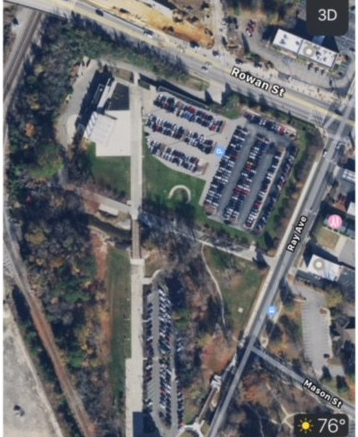 I’m not suggesting we pave over festival park.  The point is that the grassy lawn could hold several hundred vehicles within a 5 minute walk of the stadium.  Restrooms are already present for families to use.  Food trucks and vendors could even line the Linear Park walkway to catch people on the way to the game.  If the grass gets damaged, I’m sure Methodist College’s Turf Management students could assist us in keeping up the field for concerts and other events.

In the end, this is just an idea and one of many that will be needed to get around this problem.  I just wish we could park in our 15 million dollar deck, right frigging next to the stadium.

Feel free to share your thoughts.  Maybe our parking consultant from Indianapolis is listening.