June 22, 2018 By Matt Richardson in Fayetteville Politics Leave a comment

“The baseball stadium is expected to be an economic home run for the local Fayetteville area.”

The UNC School of Government has cited a recent study that suggests that it may not be.  The study tracked the economic impact in sixteen cities that placed minor league stadiums in their downtown areas.  A summary of the findings:

Stadiums can revitalize a city’s downtown, but data suggests they merely concentrate development around the new stadium and don’t create new growth.

The gist is this:  a new downtown stadium works like a magnet, drawing people in from other parts of the city and leaving vacancies where they once lived and worked.  There is little net impact to a city’s economy as a whole.

We’ve already seen this phenomenon take place in Fayetteville.  ERA Strother Real Estate is moving into the Festival Park Plaza Building next to the stadium, taking up an entire floor.  The Fayetteville Observer reported the company was “bringing up to 100 jobs to the downtown area.”

It’s important to note that while ERA’s move will bring jobs downtown, it’s not bringing jobs to Fayetteville or increasing our tax base.  These jobs were already here.  The company is simply relocating from its current spot on Breezewood Avenue into the building next to the stadium.  This is an example of the “magnet” effect that the study predicted.

Will anyone move into the Breezewood office building to fill the vacant commercial space?  Until that happens can we call the move an economic success for the city?  If our goal is to shuffle Fayetteville citizens and businesses downtown, then we are succeeding.  If we’re trying to create economic growth for Fayetteville, we’re not.  We’ve just moved the pieces on the checkerboard.

I’ve noted in the past that I support the downtown baseball stadium, but I support it for what it is: a place for the public to gather for games and community events.  It’s not going to re-vitalize our economy, despite all the sunny rhetoric that has been used to try to gain political support for the project over the years.

To be fair to the other side of the argument, there is talk of new restaurants in the Prince Charles building(s) next stadium, and we have a new hotel and apartments on the way.  We’re even building a parking deck to service these amenities, but we won’t get to use it for games.  Perhaps these new businesses will add to Fayetteville’s bottom line.

Time will tell, and when it’s all said and done, we’ll still have a good place to watch a ballgame.  I wish it didn’t have to be more than that, but it is, and for a very simple reason:  the stadium is being funded by cuts in other government services.

I’ll leave you with the stadium funding chart: 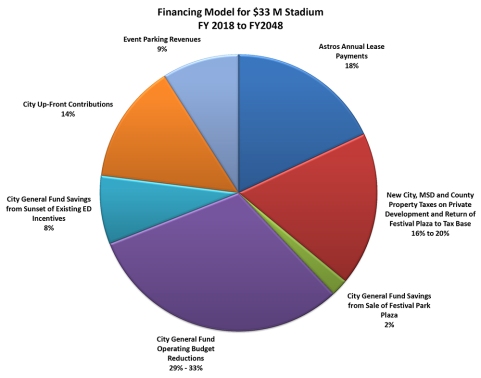 I think it’s worth asking these questions.