As the father of two young boys, one already in Kindergarten, I can’t help but feel helpless seeing American schoolkids murdered in their classrooms on a monthly basis.  “Thoughts and prayers” are running thin.

Columbine happened when I was in high school.  I remember discussing it with my English class.  Most of us wrote it off by arguing that the kids responsible were “just crazy.”  Colorado was too far away, and it never really registered.  We went on being high school kids.

Flash forward twenty years:  I’m a dad now, and I’m at a PTA event in the auditorium of my old elementary school where I was a turtle in the Christmas play.  The speaker interrupts bingo night to solicit donations to construct a solid wooden fence around the playground to “protect the perimeter” of the school.

It used to be that there was a mass shooting and it was in the news for a few days, but it was soon forgotten and we all went about our lives.  It could happen here, but it wasn’t a real threat, just a random freak event like a plane crash.  We didn’t worry about “protecting our perimeter” like we were in a war movie.

Times have changed.  We’re averaging one school shooting per week in 2018.  A danger that once seemed random is now making an appearance at bingo night where it follows you home and sets up shop in the back of your mind where you store your catalog of fatherly fears.  When you blog about it two months later, you’re still wondering if it could be your kid.

It’s a self-evident truth that more guns = more gun deaths.  Take basic math, logic, the nature of human conflict, add a dash of gun powder, and you get the following:

Assault weapons kill people with amazing speed and efficiency, so it would make sense to try to keep these weapons out of the hands of minors, criminals, crazy people, etc.  But we’re North Carolina, and we’re exceptionally exceptional so there is absolutely nothing our right wing legislators are going to do to curb access to assault weapons.  Nothing.  These men bash their peers in primaries if they get a B+ rating from the N.R.A. 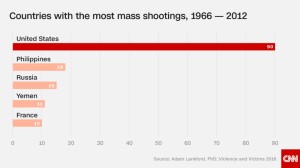 But have no fear.  Our leaders are on an innovative mission this Spring to create new ways to save our kids without infringing on your (or their) right to bear assault weapons.  Here’s a list from Longleaf Politics of school safety bills pending in the legislature:

Do you feel better now?  I don’t, and I’m not trying to be negative or sarcastic.  It’s as if we’re conceding that these shootings are a new way of life, and we’re just trying to find a way to beat the shooters to punch.  If only we had more psychologists, more heroes to step in front of the bullets, or more wooden fences, we could stop them.

While all of these bills are noble, they ignore the shiny black elephant in the room.  The ignorance is intentional, just ask the Speaker of the House:

Lawmakers are reviewing ways to increase school safety. But those efforts are expected to stop short of gun restrictions.

“Folks want to try to drag the gun debate into it,” Republican House Speaker Tim Moore told a TV interviewer last week. “Look, that’s a discussion for another time.”

I guess he’s talking about me.